This section of the A9 trunk road is dual carriageway for its full length (approximately 47km) from Keir Roundabout (west of Dunblane) to Inveralmond Roundabout (Perth). 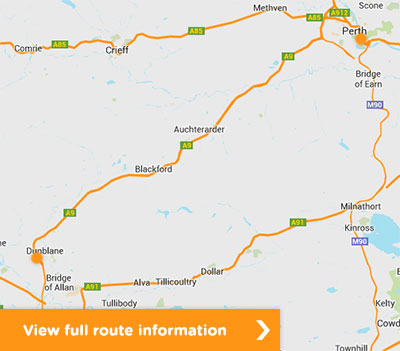 Keir Roundabout is the junction of the A9 with the M9 motorway which leads to Stirling, Glasgow and the south as well as providing local access to Dunblane to the east and Doune to the west. Inveralmond Roundabout is the junction where the A9 continues north to Pitlochry and Inverness as well as providing local access to Perth to the east and Inveralmond Industrial Estate to the west. There is also a major junction with the M90 motorway and A93 local road at Broxden Roundabout to the south of Perth.

There are also numerous farm accesses, field accesses and side roads which form priority junctions with the A9 along the length of the section. These junctions frequently have associated gaps within the central reserve.

Within the existing verges there are several notable roadside features including safety barriers, trees, fencing and street lighting.