North of Tore Roundabout the A9 is entirely single carriageway. The section between Tore and the junction with the A949 at Clashmore near Dornoch is DMRB compliant with good forward visibility and overtaking opportunities. 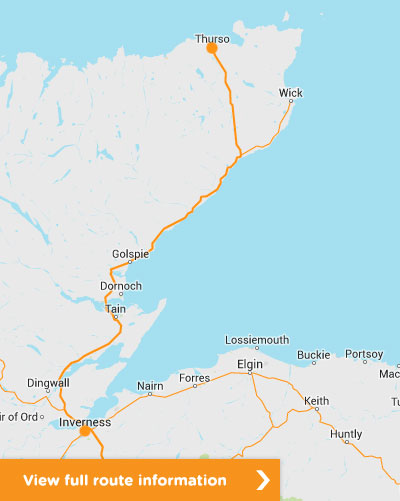 A949 Clashmore to Latheron

North of Clashmore, alignment and widths of the road are to a lower standard with only short sections at The Mound and The Ord of Caithness  being to the standards seen further south. The route  follows the coast  through this section and the alignment is generally made up of tight radius  bends and poor forward visibility that present few overtaking opportunities. There is a substantial change in altitude north of Helmsdale where the A9 climbs from sea level to over 200 metres on  the recently improved section over the  Ord of Caithness.

North of Latheron the  A9  becomes  a  moorland  route  crossing  the  exposed Causey Mire. Alignment is generally good with excellent forward visibility. There is the settlement of Spittal midway along this section but overall the frontage is overwhelmingly rural with agriculture predominating  to  the  north  of  the  junction with A882.

The A9 passes through the centre of the town of Thurso to end at the port facilities at Scrabster Harbour.