What is the law regarding the signing of speed limits in the UK?

The Traffic Signs Regulations and General Directions 2016 and the guidance contained within the Traffic Signs Manual Chapter 3 are followed by Roads Authorities when it comes to the signing of speed limits. The essence of the strategy is that speed limits signage should be consistent and clear across the whole of the country.

The national speed limit applies generally, except where a roads authority, by Order, determines that a lower speed is suitable, in which case it will be appropriately signed at the beginning and end of the area of restriction and will also include repeater signs throughout this area.

What does this mean for the A9?

The A9 for its entirety between Dunblane and Inverness is subject to the national speed limit. 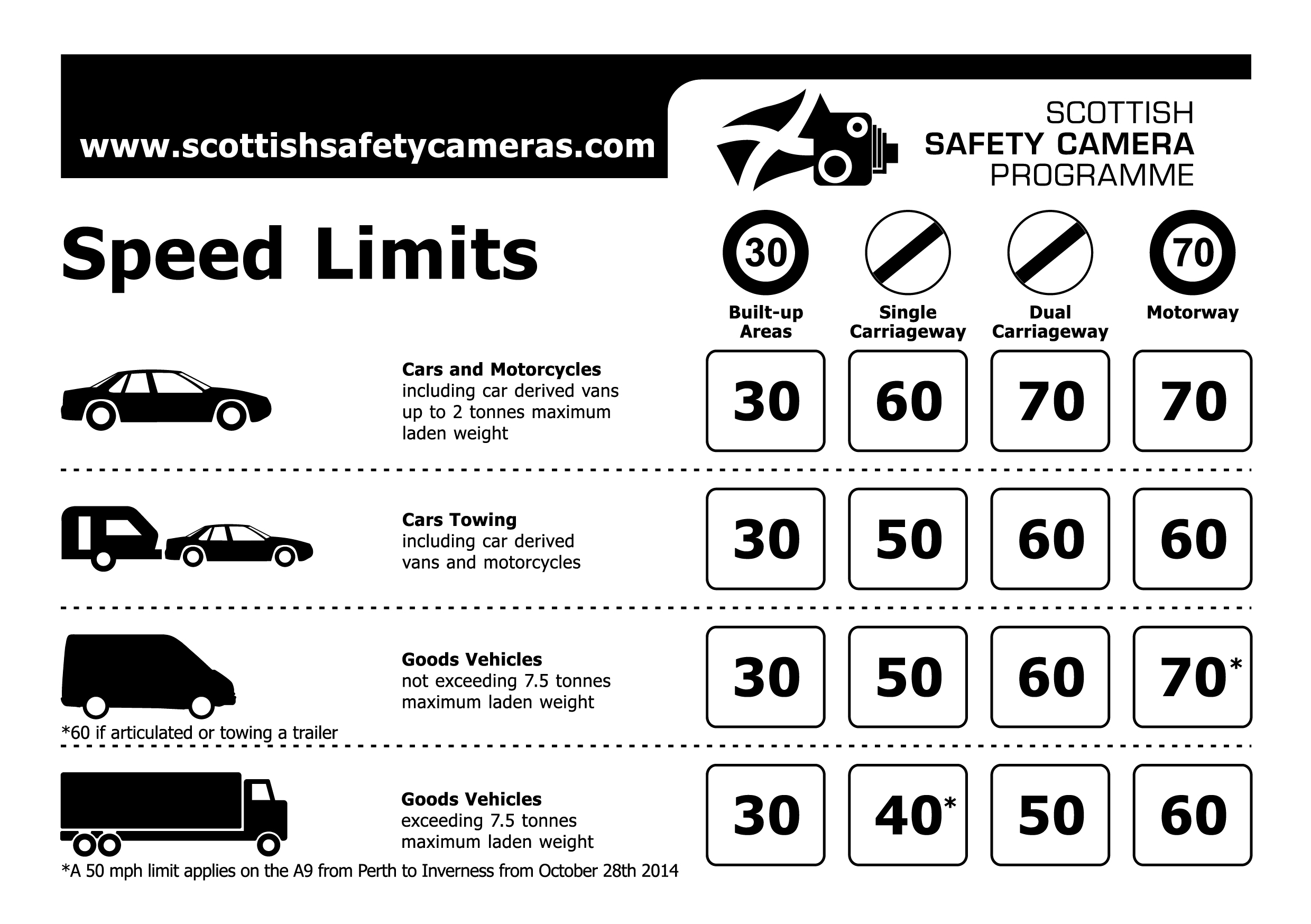 What is the national speed limit?

When you enter an area that is signed by a diagonal black stripe on a white background, you are driving under national speed limit restrictions. For most vehicles this will mean 60mph on single carriageway roads and 70mph on dual carriageway roads. It is also 70mph on the motorway network unless otherwise indicated. The national speed limit for your vehicle is dependent on the classification of your vehicle.

What about the 50 mph HGV pilot?

The one major change for the A9 is that a pilot project is being introduced to raise the speed of Heavy Goods Vehicles which have a laden weight exceeding 7.5 tonnes on the single carriageway sections between Perth and Inverness from 40 to 50mph. Because the speed limit is changing for this class of vehicle in relation to the single carriageway sections of this road, there will be regular signing to highlight this change along its length. This means that vehicles of this class will have a consistent speed limit for the length of the A9 between Dunblane and Inverness. This change will come into effect from Tuesday 28 October 2014, to coincide with the average speed camera system going live.

Further information on the 50 mph HGV pilot is available in our FAQ section.

Why do you not just sign the A9 at regular intervals to remind everyone of the speed limit?

There must be a consistent policy across the UK in relation to signing of speed limits and the rules in the Traffic Signs Regulations and General Directions 2002, supplemented by the guidance in the Traffic Signs Manual focuses on this consistency indicating that to introduce changes in some cases but not others would result in inconsistency and driver uncertainty.

What are a drivers responsibilities?

The Highway Code Rule 124 & 125 are very clear on the responsibilities of a driver to know the speed limit for the class of vehicle that they are driving.

What about Signing for the Average Speed Cameras?

Signing for the location of speed cameras is not legally required but is considered best practice. Every camera site on the A9 will be clearly signed on its approach  ensuring that no driver will drive into an enforcement area without first seeing this visible reminder. On some of the longer stretches between cameras there will also be repeater signs.

What is the speed limit on the A9 for the stretches where there is an overtaking lane?

These stretches which are commonly known as 2+1 are classed as single carriageway and drivers often make the mistake in thinking that the national speed limit for dual carriageways applies to these stretches of the A9. To be clear for most vehicles this will mean a maximum of 60mph on these stretches.