The Enforcement Strategy for the route is now firmly established and involves a combination of average speed cameras (ASC) introduced in late 2014 between Dunblane and Inverness and mobile enforcement north of Inverness. The principal purpose of the enforcement strategy is to encourage compliance with the speed limit rather than detecting large numbers of offenders. The research carried out by the A9 Safety Group highlighted that on average over 36% of drivers were exceeding the speed limit on the A9. From an overall perspective Police Scotland continues to patrol the route using both marked and unmarked vehicles to monitor driver behaviour. 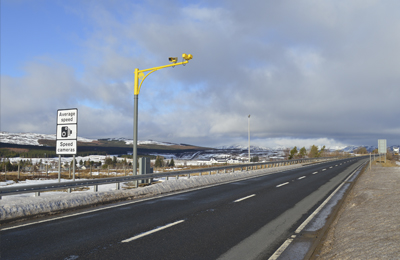 This entire stretch is covered by average speed cameras.

Between Perth and Inverness ASC monitor the single carriageway sections (including the 2+1 stretches) while the dual carriageway sections have a number of mobile sites which are enforced by the North Safety Camera Unit. ASC are also the principal speed enforcement method used within the long term roadworks associated with the upgrading programme.

The North Safety Camera Unit has a number of mobile camera sites between Inverness and Thurso which are monitored on a regular basis.